AVON, Connecticut – (June 22, 2021) – Mintz + Hoke, the award-winning full-service advertising agency, is marking their golden anniversary this year. To commemorate five decades in the advertising business, Mintz + Hoke created a new brand identity, while staying true to who they are at the core: Immersively different.

Among the agency’s updates for its 50th anniversary are a new logo, refreshed website, expression, tagline and a modernized aesthetic. “Our new look and feel reflects the evolution of the Mintz + Hoke brand, with a bold, modern design and a retro vibe – the aesthetic a complement to our immersive philosophy, which has remained consistent since day one,” said Sean Crane, Chief Creative Officer, Mintz + Hoke.

"Being immersively different is a thread tying our past to our present, and Mintz + Hoke has reached a milestone few advertising agencies have because we've adapted to remain relevant while staying true to our founders' mentality," said Ron Perine, Principal and CEO, Mintz + Hoke. 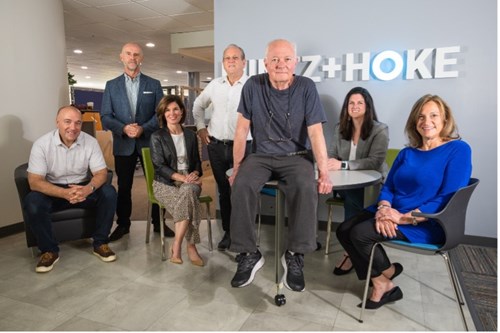 Founded in 1971 by Alan Mintz and Joe Hoke, Mintz & Hoke (now Mintz + Hoke) began as a traditional advertising agency. Mintz was a Madison Avenue writer and creative director before returning to his native Connecticut where he teamed up with art director Joe Hoke at Graceman Advertising in Hartford, Conn. The two left Graceman the following year to form their own agency. “Within two years, Mintz & Hoke was known as one of the top creative agencies in Hartford and one of the top three in New England,” said Joe Hoke, now founding partner at Lawson & Hoke.

Among Mintz & Hoke’s most visible work early on was with the newly launched Connecticut Lottery, with television and radio commercials regularly seen and heard throughout the state featuring the memorable slogan, “You can’t win if you don’t play.” The agency broke into business-to-business communications in the mid-Seventies with Loctite Corporation’s Industrial Products Group, combining the attention getting power of consumer advertising with a unique understanding of the industrial customer.

A pioneer in its approach, Mintz & Hoke developed its Street Smart brand-positioning model in 1976 to get strategically smart consistently and was featured in Adweek. Now called Focus Fast, the model continues to define its strategic creative approach and is rooted in co-founder Joe Hoke’s mantra to “get out of our offices and into the heads of our clients’ customers” to capture insights few agencies do.

In 1979, a public relations department was added and fully integrated, visionary for its time, to offer clients full-service marketing communications. Founded and led by Mary Farrell, the agency’s PR department was the most respected in the state. Farrell retired in 2018. Over the years, the agency’s media department would grow to one of the largest in the region. Mintz + Hoke now operates Media Only, an entity formed in 2002. Media Only works with Mintz + Hoke clients, its own clients who have internal creative resources, and in partnership with other creative agencies.

To learn more about Mintz + Hoke, the clients and the work they immerse themselves in, and how they will continue to celebrate fifty years strong, visit Mintz + Hoke, connect on social on Instagram, Facebook, Twitter and LinkedIn to join the conversation, #MintzHoke50 #ImmersivelyDifferent.

Mintz + Hoke, an immersively different full-service advertising agency 50 years strong, today offers an array of creative, research, strategy, design, digital, media, public relations, analytics and brand activation capabilities. The agency has been recognized as one of Connecticut’s Top Workplaces by the Hartford Courant and FoxCT, as well as the Hartford Business Journal.