Mintz + Hoke today announced the agency won a total of five awards at the Greater Connecticut Chapter of the Public Relations Society of America’s 2019 Mercury Awards. Recognition is provided in four categories: bronze; silver; gold; and best in show. 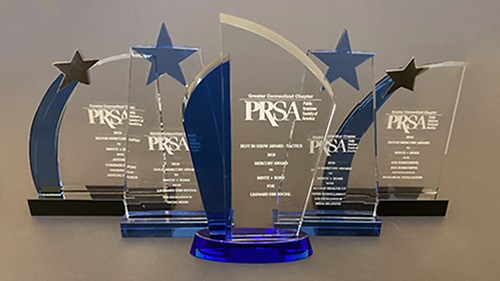 Leonardo DRS’ social media activation was also awarded as “best in show”—one of only two awards provided in that category representing the highest level of achievement.

“These awards reflect the passion and dedication of our clients who trust us to help them tackle tough challenges,” said Mintz + Hoke Chief Executive Officer, Ron Perine. “Together, we accomplish great things—from starting dialogues and shifting narratives, to elevating our clients’ points of differentiation and influencing public perception. Thank you to all of our clients for inviting us to be a part of their team. We are proud to stand with you and congratulate you on this shared achievement.”

Named in honor of Mercury, the Roman god of messaging and communications, the Mercury Awards celebrate the highest standards of public relations performance, and acknowledge the talent and accomplishments of the best and brightest in the state. Nominations must include context about research, planning, execution and evaluation of the tactic or strategy being submitted for award consideration. Each award nomination is evaluated by multiple PRSA leaders outside the state of Connecticut. The average of each nomination’s total score determines the level of award, if any at all. 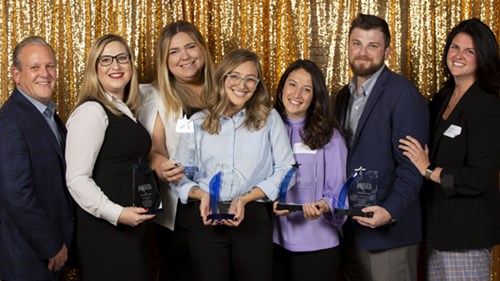 “Mintz + Hoke has a long history of influencing public perception in and outside the state of Connecticut,” said Public Relations Account Supervisor, Caroline Lee. “As the industry evolves, it’s exciting to see, and be a part of, that change. Media relations will always be core to the practice, but the opportunity to leverage new communications channels and foster collaboration between paid, owned, earned and shared media is where we do our best work. That’s how we deliver the best results for our clients. The diversity of categories for which the Greater PRSA recognized us demonstrates this industry evolution and how PR remains an important part of integrated communications.

Caroline Lee was also voted in as a member at large to the Greater Connecticut Chapter of the PRSA board of directors. Members of the chapter cast digital or in-person ballots to elect board members. To be eligible, candidates must maintain membership and be in good standing with both the national and chapter level of PRSA.